Two out of three drivers suffer from pothole damage 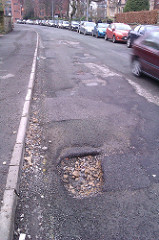 Two-thirds of company car and van drivers have suffered some form of damage as a result of hitting a pothole in the last year, according to data from the RAC Foundation.

Almost 29,000 drivers made claims against councils for damage caused in the last financial year.  According to the survey, over £2 million was paid out overall.

The government is in the process of planning the biggest set of motoring reforms since the driving test was first introduced in 1935.

A number of major changes have been tabled as part of a new consultation document, including the closing of test centres, part-privatising the practical exam, increasing the age limit for licence renewal and higher fees for motoring services.

Motorists ‘fed up’ with state of Britain’s roads

Motorists are ‘fed up’ with the condition of Britain’s roads and rising fuel prices and insurance premiums. That is the view of Motors.co.uk following a survey which revealed 82 per cent of drivers were disgruntled with the cost of motoring, endless postholes and continued roadworks.

According to the survey a third of motorists are making an effort to decrease their driving time, while three-quarters feel that the latest Government policies including the Fuel Duty cuts are not supporting them financially at the wheel.

The Department for Transport (DfT) has moved to pledge £100 million to local authorities in a bid to tackle the nation’s growing pothole problem.

Transport secretary Philip Hammond revealed the funding will be distributed in addition to the £831 million already divvied out to councils for road maintenance in 2011.

Extra £15m given to fix potholes on Scotland’s roads

Scotland’s motorists will breathe a sigh of relief after the Scottish Government sanctioned a further £15m to cover the impact of the harsh winter conditions on the country’s highways.

A Government spokesman confirmed that the money would be instantly available for use on local roads that require urgent repair as well as covering the large maintenance costs incurred keeping the roads free from snow and ice during the arctic blast.